The past year offered an interesting mix of positive and negative news as investors around the world eagerly anticipated signs of economic recovery and financial stabilization. While most financial markets logged positive returns for a second straight year, investors had to endure a host of troubling news and pessimistic market predictions. Even eight months into the year, the S&P 500 Index was down 5.9%. But diversified, long-term investors were rewarded with attractive market returns, as the S&P 500 closed the year up 15.06%, with 10.76% of the gain coming in the fourth quarter.

Stocks performed well in the US and most developed countries, and across size and value risk factors, despite ongoing concerns over a possible double-dip recession, rising government indebtedness, and inflation. Thirty-seven out of forty-five countries tracked by MSCI achieved positive returns in both local currency and US dollar terms. Fixed income returns were positive, thwarting assertions that bond prices were in dangerous “bubble” territory. Despite continued weakness in residential housing and commercial property, real estate securities around the world outperformed the broad equity market. Diversification across the size and value risk dimensions proved rewarding in both US and non-US markets, particularly among small company stocks. 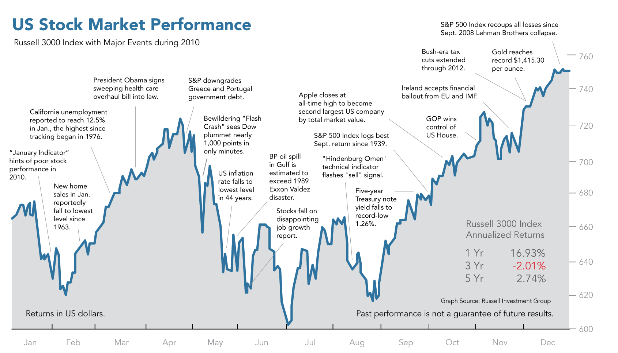 As shown in the US Stock Market Performance chart, the broad US stock market logged strong performance, returning 16.93% for the calendar year. The chart features some of the year’s most highly publicized events. These events are not offered as an explanation of market performance, but simply to illustrate that long-term investors faced a major challenge to stay disciplined in a volatile news environment. Although investors must deal with uncertainty in all markets, 2010 may have presented a more intense challenge as markets watched for signs of economic recovery from the global financial crisis.

The World Stock Market Performance chart offers a snapshot of global stock market performance, as measured by the MSCI All Country World Index. Actual headlines from publications around the world are featured. Again, these headlines are just a sample of many events during the year. 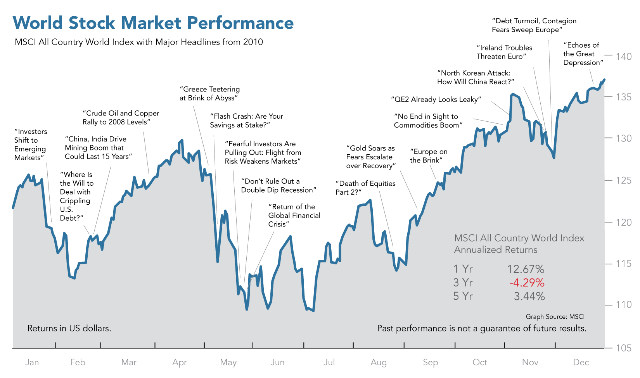 Throughout the year, investors could find a host of reasons to avoid stocks and wait for more positive news before returning to the market. As these select headlines suggest, determining the right time to invest is a difficult task since the market anticipates news and quickly factors in new information.

The Year in Review

In retrospect, it was a good year for globally diversified investors. But if investors had shaped their market expectations and decisions according to economic news, they likely would not have expected positive returns. The following are a few dominant themes during the year.

Mixed Economic Signals
Although investors in the US and Europe awaited signs of a rebound, economic news was mixed, with some measures showing gradual improvement and others offering evidence that the economy remains vulnerable. Favorable news included moderate economic expansion in the US, Euro zone, and Australia, as well as rising factory orders and manufacturing activity, rebounding auto sales and automaker profits, slowing growth in US bankruptcies, declining home foreclosures, and an improving financial services sector. In late Q3, US corporate cash levels reached $1.9 trillion, which, as a percentage of total corporate assets, is the highest since 1959. In late Q4, initial claims for unemployment fell to the lowest level in two years. Negative news included continuing high jobless rates in the US and other developed markets. US unemployment began the year at 9.7%, dipped to 9.5% in July, but climbed to 9.8% in November. Personal bankruptcies in the US increased 9%, reaching their highest level since 2005. Also, bank failures in 2010 were the worst since 1992, during the savings and loan crisis.

Housing and Real Estate
The global property decline that helped trigger the 2008 financial crisis began to ease in 2010. Home prices improved in the UK but remained weak in the US, with monthly sales of new homes falling at one point to the lowest level since tracking was initiated in 1963. Foreclosures increased dramatically in the first half of 2010 before improving in Q4. However, 2010 proved to be another successful year for REITs, despite recurring predictions of a brewing commercial real estate collapse that would trigger a financial crisis.

Quantitative Easing and Fiscal Stimulus
Governments and central banks took additional actions to stimulate economies and shore up financial markets. The most direct support came as central banks supported government bond markets in the US and Europe. The Federal Reserve’s November announcement of a second round of quantitative easing (known as “QE2”) sparked concern that additional monetary stimulus would stoke inflation and debase the dollar. According to some, the actions helped lift stocks and corporate bond markets. In December, the extension of the Bush-era tax cuts and a 2% reduction in Social Security payroll taxes in 2011 improved economic expectations.

Sovereign Debt Worries
During the year, the weakening finances of some European states, including Portugal, Ireland, Italy, Greece, Spain, and Belgium, raised concern that the financial crisis had moved from private-sector banks to public-sector balance sheets. These concerns led to the downgrading of certain government debt and widening of bond yield spreads. The Euro zone countries and International Monetary Fund responded with loans that were conditional on some sovereign borrowers taking drastic austerity measures.

Inflation vs. Deflation
Despite moderate inflation in most economies during 2010, economists warned that continued government budget deficits and monetary expansion would drive up prices. Conversely, the US central bank was concerned that inflation was so low that the economy might slip into a deflationary cycle. In fact, potential deflation was one of the main reasons the Fed implemented QE2 and pumped $600 billion into the banking system. By year end, the Fed indicated that the deflation threat was easing.

Higher Commodity Prices
Commodities climbed during 2010, with many sectors reaching price levels not seen in decades. Copper prices, which are considered a bellwether of economic activity, rose 33%, and oil gained 15% to finish 2010 over $91 a barrel. Agricultural commodities, a traditionally volatile sector, saw even more extreme price swings. Concern about a weakening dollar drove up precious metals, with gold exceeding $1,400 per ounce and silver up 81% for the year.

Investor Confidence
In the wake of the financial crisis, investors who have become more risk averse or accepted the tenets of a “new normal” in the economy and markets chose to remain in fixed income assets. Bond funds in the US received a massive net inflow of money in the past two years, suggesting that many investors who fled stocks may have missed out on much of the rebound in equities. Throughout most of 2010, investment flows were leaving the US stock market and moving to emerging markets. In December, flows turned sharply positive in the US, with an estimated $22 billion directed to US stock funds.

After a slow start and a tough second quarter, most markets in the world ended the year with positive results. The US market indices accounted for most of the top performance, with the Russell 2000 Growth Index delivering a 29.09% return for the year. US small cap and small value also were among the top performers. (All returns are in US dollars.)

Most developed markets around the world logged positive returns, with thirty-seven of the forty-five countries that MSCI tracks gaining ground in both local currency and US dollar terms. Scandinavia and Asia had particularly high returns. Overall, the MSCI World ex USA index gained 9%, and the MSCI Emerging Markets Index gained 19% for the year.

In the last few months of the year, the highest returns were generally experienced by countries whose economies are dominated by oil and commodity exports—for example, Canada, Norway, Russia, and South Africa. Other emerging markets, such as Thailand, Philippines, Chile, and Peru had strong returns. China, despite its continued high profile and news of economic growth, was one of the lowest-performing emerging markets. The US dollar lost ground against the Canadian dollar and most Pacific Rim currencies, which helped dollar-denominated equity returns from those countries. The US dollar gained against the euro and British pound. 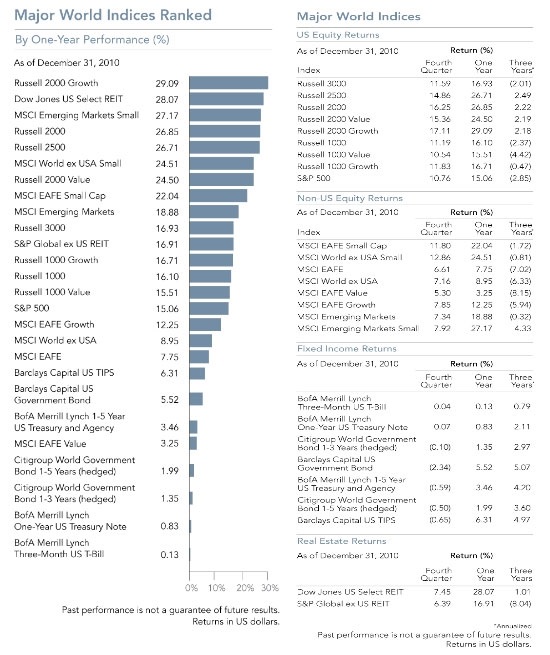