Is It Time To Abandon Stocks

It’s not unusual to hear prognostications of doom and gloom when the markets are in disarray, as they have been for several months now. A front page article on the Wall Street Journal this past week would indicate that stocks might be in store for a ten year lull, in other words, dead flat performance. If you read the headline alone (“Stocks Tarnished by Lost Decade: U.S. Shares in Longest Funk Since 1970’s), you might just consider running for the exits in a fit of panic. But, should investors worry and should they consider abandoning equities for safer bets? Not quite, here’s why.

Let us preface this discussion by recognizing that this is not the first, nor the last time we might be tempted to action by such dramatic interpretations within the financial media. In fact, we saw such similar predictions several decades ago when BusinessWeek published it’s infamous cover on “The Death of Equities”. The article, published in 1979, was written during a period when the markets were see-sawing from year to year following a peak six years before in January of 1973. Inflation was nagging economists and U.S. fiscal policy was merely an afterthought. Sound familiar? The article fleshed out bearish perceptions and suggested “the old rules no longer apply” and the “the death of equities is a near-permanent condition.” Had you bought into this theory and dumped all your stocks (let’s use the S&P 500 as a proxy for stocks) in 1979, you would have missed out on one of the greatest bull markets in our history. Here is the data to prove it: 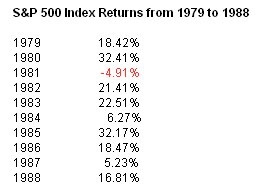 The annualized return during this ten year period was a very handsome 16.32%. I don’t know about you, but I’ll take that any day of the week! We saw this prediction of doom again in July 1993, when Forbes published “Bearish on America” and implored readers to sell U.S. stocks and buy emerging markets. For the sake of argument, let’s look at the three year period following the month the article was published. You be the judge, did this make any sense?

What this article, and many others like it, fail to point out is that the definition or reference to stocks cannot be, and should not be limited U.S. based, large cap securities (for which the S&P 500 serves as a proxy). Is the assumption that the S&P 500 is the only market we can consider for stock investments? Are there no other stocks in the world, or even here in the U.S. worth considering? In fact, there are thousands of stocks around the world and across various sectors that are excluded from that presumption, which puts a hole in the doom and gloom theory. We can cover portfolio construction in a future article. But, to make a blanket statement like that, without regard to the other types of stocks that exist in the global markets is a disservice to readers. There is no substitute for broad, global diversification. Markets will naturally follow cycles, often experiencing periods of extended underperformance, followed by periods of bullish returns. That’s the nature of the beast. A globally diversified portfolio comprised of different asset characteristics and sectors remains the best long term approach for investors, and yes, that means holding on to stocks. Diversified investors with a broad representation of the different types of asset classes available in the market survived the storms of the last bear market (2000 to 2003) and will survive the current one too.

The Lost Decade– For Whom?

Is the U.S. stock market going to end the decade flat? The S&P 500 just might, but the rest of the global markets have been quite profitable. If we look at the monthly returns from January 2000 to February 2008 and annualized the returns, here is what we’d find:

So, is it time to abandon stocks? Of course not. All of that doom and gloom becomes quite irrelevant if you have structured a properly constructed portfolio, designed to withstand the gale force winds of this market’s “perfect storm”. Remember, dramatic headlines sell papers, much like the financial pornography we see on a regular basis across the financial networks on the tube. Sizzle grabs your attention and sells ads. Trying to predict the future is a loser’s game and nobody owns a crystal ball. If they did, believe me, they would not be sharing it with the rest of the world. The best defense right now is patience and discipline.