Should You Keep Investing During A Skinking Market

Should You Keep Investing During A Sinking Market?
by Cathy Pareto, MBA, CFP®, AIF®- 2008

Sure, it’s been a rocky year in the markets—to say the least. It is so hard to for anyone to hide from the perpetual bad news, so in times like this, it’s easy to let our emotions cloud our good judgment. Despite the erratic movements of the global markets lately, many of us continue, with great discipline, to plow money into our current savings programs, whether through brokerage accounts or our 401k plans. But, is this the right thing to do? Or, are we simply throwing good money after bad?

Everybody loves investing when the market is up because we often see immediate returns on our investments. When the markets are down, however, our fears tend to paralyze our inclination to keep investing new dollars.  Psychologically and emotionally, nothing is more depressing than seeing your money evaporate. But if you invest regularly and have some time before retirement, bear markets can be quite a blessing.

If history is any indication, we can safely assume that the stock market is expected to yield positive long term returns over time. Does this happen every year? Of course not; performance will vary by time period and asset class, and there will always be bad years mixed in with good years. That’s just the way markets work. The best time to buy, or keep buying, is when the market is in the toilet. For the past few decades, every time the market took a significant fall, investors who bought on the dips were soon were rewarded with a profitable bounce. Let’s look at the numbers a little closer, using several indexes as benchmarks. The Russell 3000 Index measures the performance of the largest 3000 U.S. companies representing approximately 98% of the investable U.S. equity market, the Morgan Stanley EAFE index (Europe, Australia, and Far East) is a proxy of for large caps in the foreign developed markets, and the The Russell 2000 Index measures the performance of the small-cap segment of the U.S. equity universe. 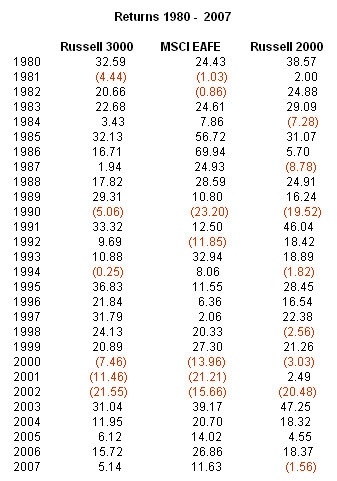 The data depicted tells a story, the years that follow a market downturn can be quite lucrative, often wiping away any losses experienced in the preceding period.

One of the worst sustained bear markets of the past half century occurred during between the late 1960’s and early1980’ s. Yet, had you continued to invest on a regular basis during that dark period, you would have set up your portfolio for a long and prosperous run shortly thereafter. Once the market turned around in the early 1980s, investors who stayed the course enjoyed exceptional returns over the following 15 year period. Using the Dow Jones Industrial Average as a proxy, from 1975 to 2006, there were 23 positive years and 9 negative years. If you were to take a simple average of the yearly returns over this time period, you would come up with an average return of 10.83%.

Still not convinced? Let’s look at the crash of 1987. An investor who bought into the market right after the crash of 1987 would have fared very well over the next 24 months. From its low in the fall of 1987, the Dow moved up 56% by the end of 1989. See, if daily market returns are random (and they are), market timing is a flip of the coin. Investors who attempt to predict market drops are just as likely to avoid them as to miss out on strong return periods. That is why it would be a mistake to sell out of the market or cut back on your investments during slow times. Because once a market bottoms out, the returns on the bounce can be exceptional, and the market can turn around quite rapidly, which we can never predict in advance.

Dollar Cost Averaging
One of the most effective ways to invest, in particular when the markets are down is dollar cost averaging. Dollar-cost averaging is an effective wealth-building strategy that involves investing a fixed amount of money at regular intervals over a long period. This type of systematic investment program is used by anyone participating in their company’s 401k or 403b retirement plan.

In “bullish” markets you buy fewer shares per dollar invested because of the higher cost per share. But, when the markets are down (or bearish), it’s quite the opposite. You purchase a greater of number of shares per dollar invested because you are buying positions at (presumably) cheaper prices. The blended average of these purchases (high and low) becomes your average cost basis.

So what should you do in a bear market? You do nothing different! If you’re a long-term investor you do the same thing in a bear market that you would in a bull market, keep investing.

None of us have the clairvoyance to predict market returns. And those that claim they can are full of hot air. So the best thing that we can do now, and always, is follow a reasonable investing strategy structured upon our past experience, our common sense, and our reasonable expectations for the future.